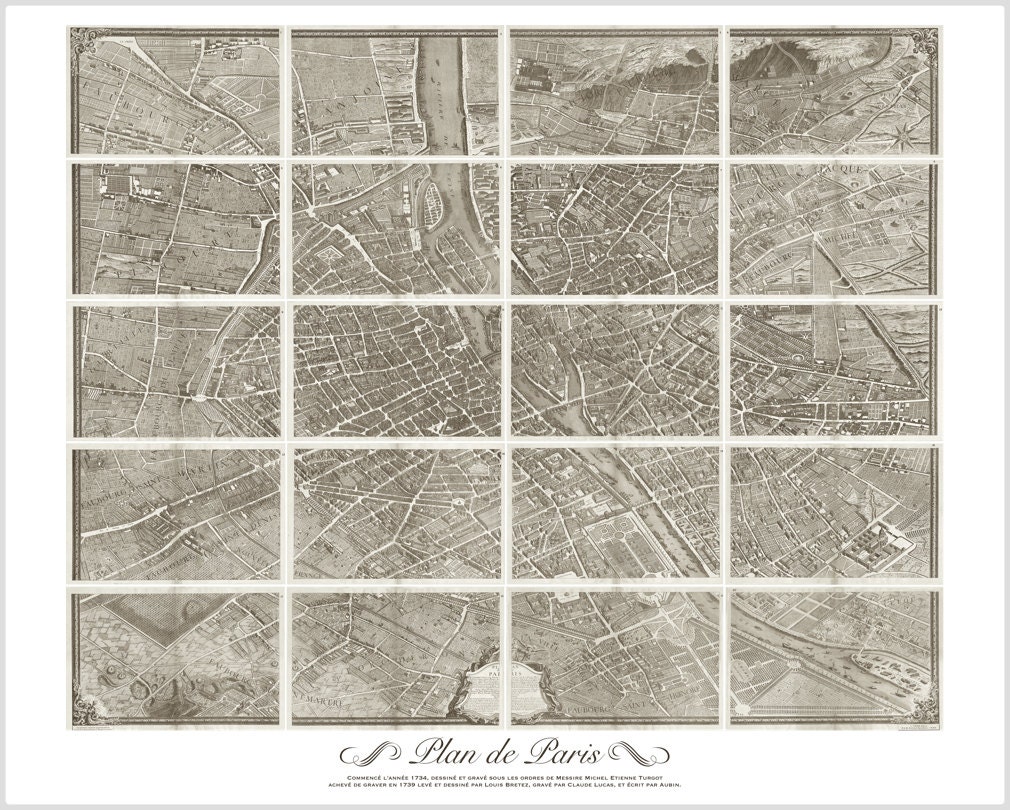 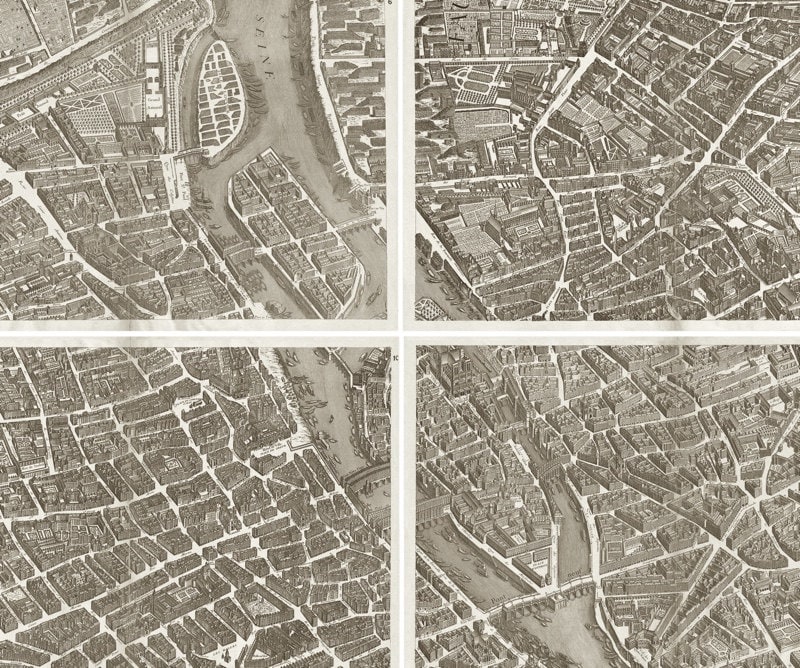 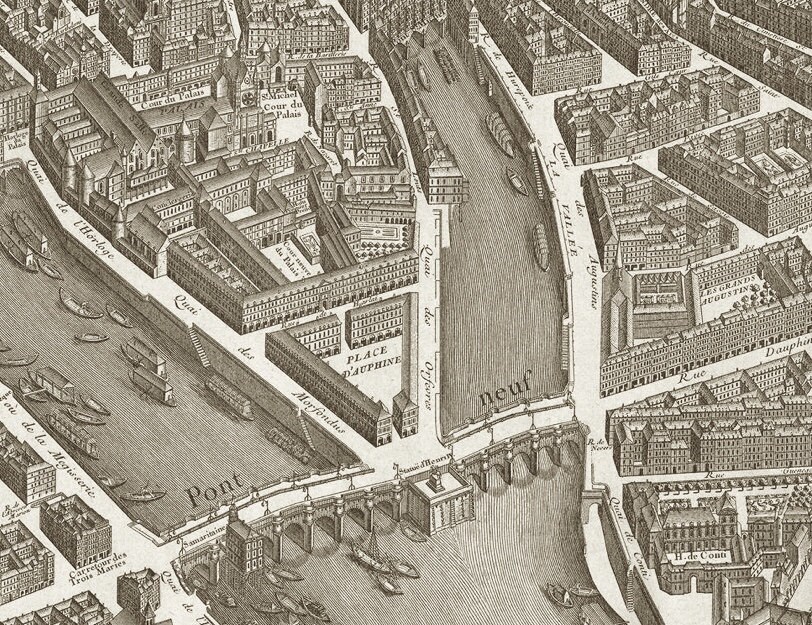 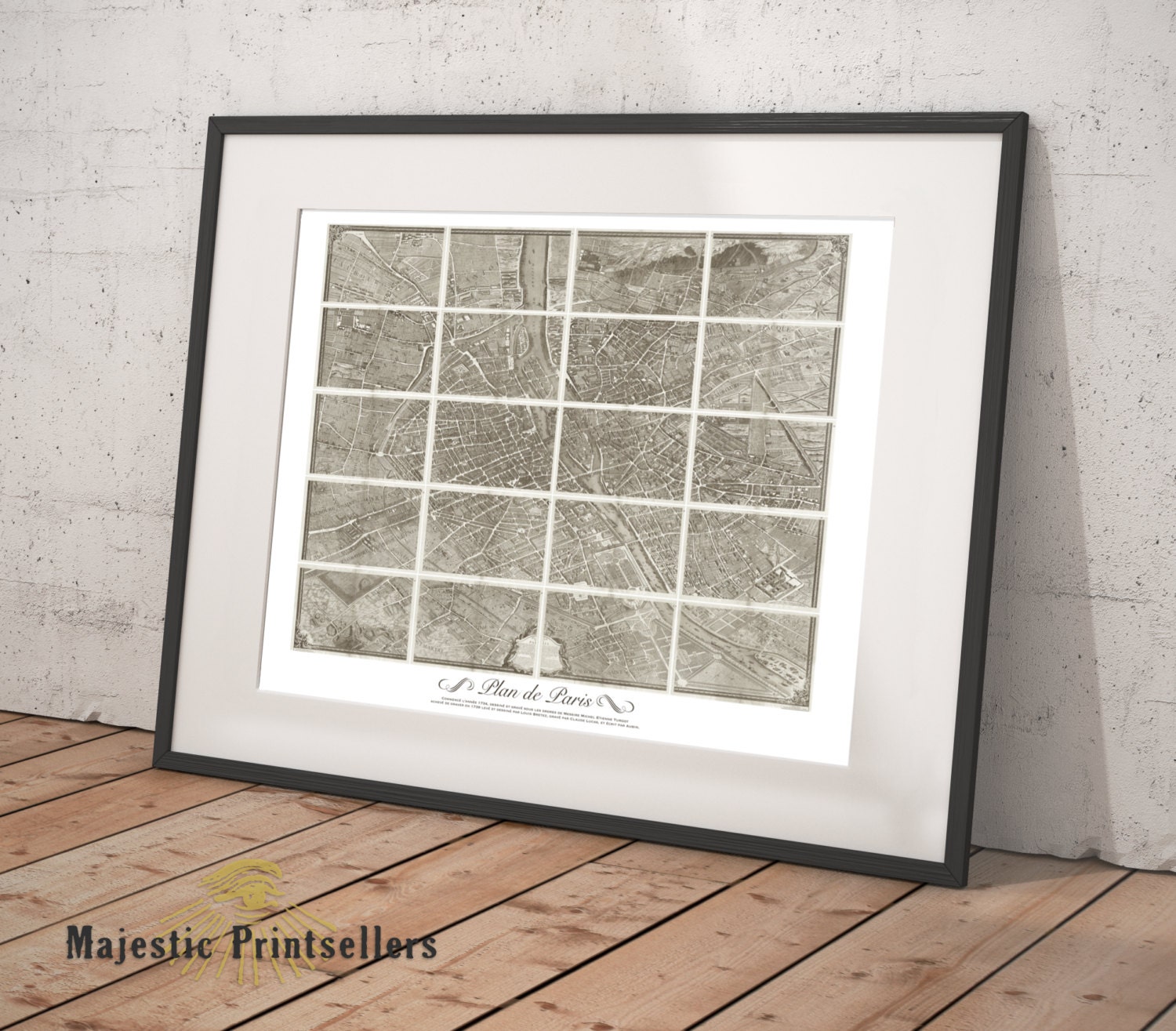 Behold the splendor of Michel Etienne Turgot's 1739 Plan de Paris! Designed by Louis Bretez and engraved by Claude Lucas, this infinitely detailed birds-eye map was 5 years in the making. It was originally published as a set of 20 printed plates handsomely bound in volumes presented to the king, provincials, and foreign dignitaries - one even being sent to the court of the emperor of China - to promote the worlds favorite city. Copies of this magnificent work now reside in collections in the Bibliotheque Nationale de France and the Bibliotheque Historique de la Ville. The original engraved brass plates are housed in the Louvre, and are still to this day used for re-printing employing the exact techniques used two centuries ago!

Not without it's critics though, the artists of Turgot’s Plan used a forced perspective, where buildings appear of the same size whether far or near on the map, considered archaic at the time. The wide, clear streets were also an artistic illusion in an attempt to render buildings in perspective on both sides of the streets without overlapping, rather than an accurate depiction of the squalor of the eighteenth-century city, with its crowded streets and teeming garbage. The French kings had long moved to Versailles a century prior, away from these urban hazards. Bretez’s vision of a modern, well-ordered city however better suited Turgot’s purpose of publicizing the glories of Paris, the commercial and symbolic heart of France.

Nonetheless, this map is a beautifully rendered snapshot of 1700's Paris, an epic undertaking still appreciated today. We have assembled all 20 plates into a single grid, suitable for framing. The map is inscribed at the bottom with a title and artist credits in French, and our exclusive print is bright and highly detailed. One can nearly see into individual windows and doorways! You'll become lost in this print for hours as you discover centuries old landmarks - Notre Dame, Le Louvre, La Sorbonne, Pont Neuf - even La Bastille which still stood at the time.

Please bear in mind, 20 full size maps comprise this smaller print. As a result, handwriting and script may not be legible in the map itself. This is not an issue with print quality.

☆ ☆ ☆ ☆ ☆
Mike, thanks so much for the beautiful print. It is exactly what I wanted. I appreciate your processing and shipping my order so quickly. Majestic Printsellers is first class all the way.

☆ ☆ ☆ ☆ ☆
These prints are amazing and some of the best I've had the pleasure of buying. Talented shop and even more amazing customer service! Will be buying from again!