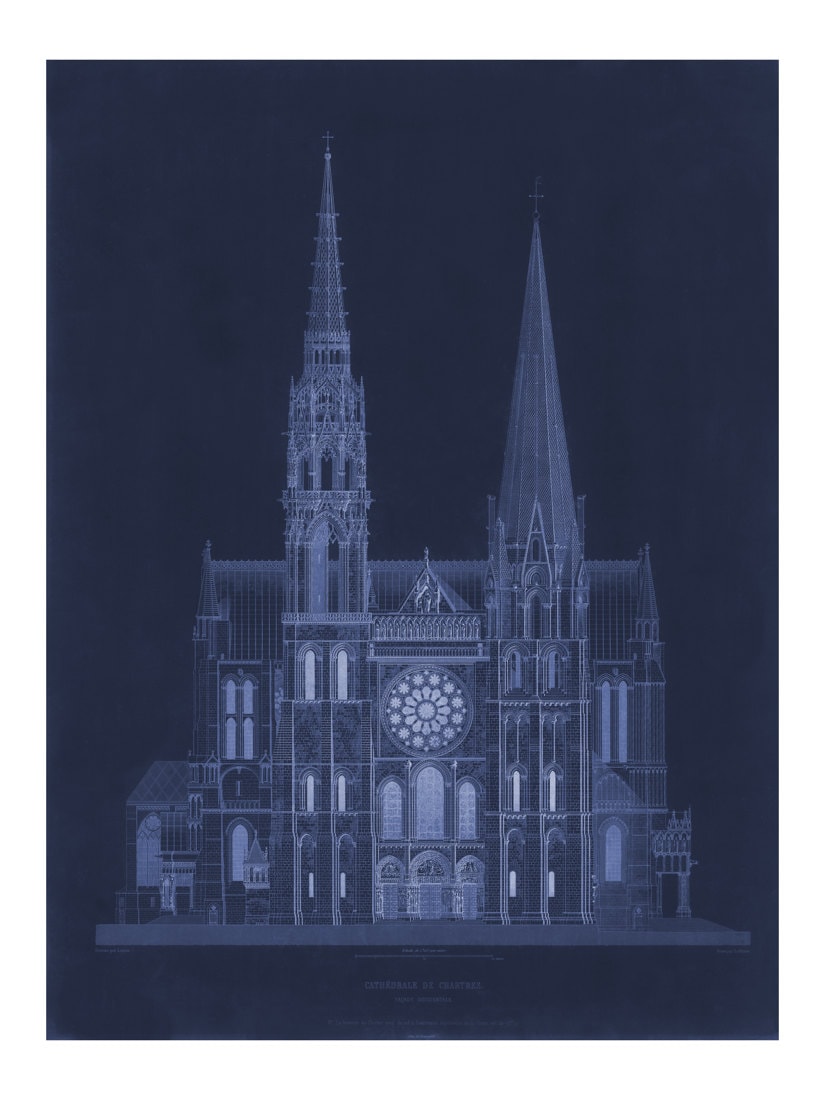 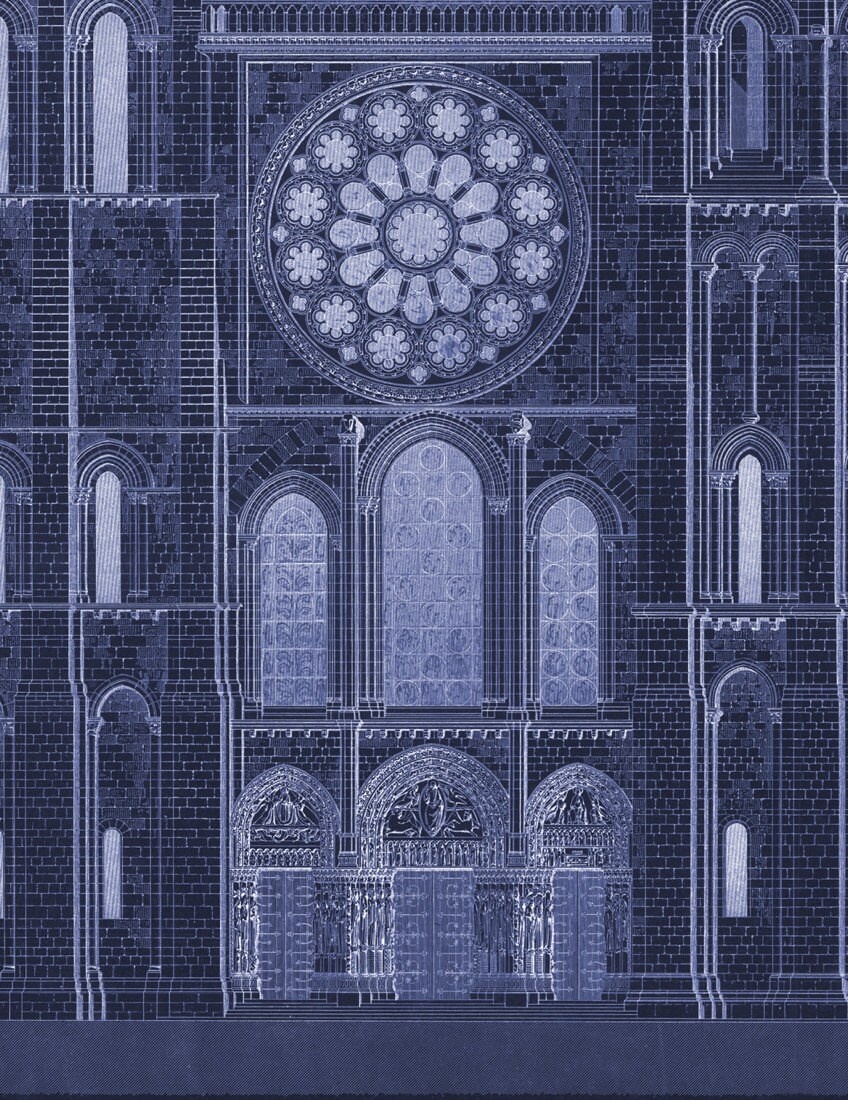 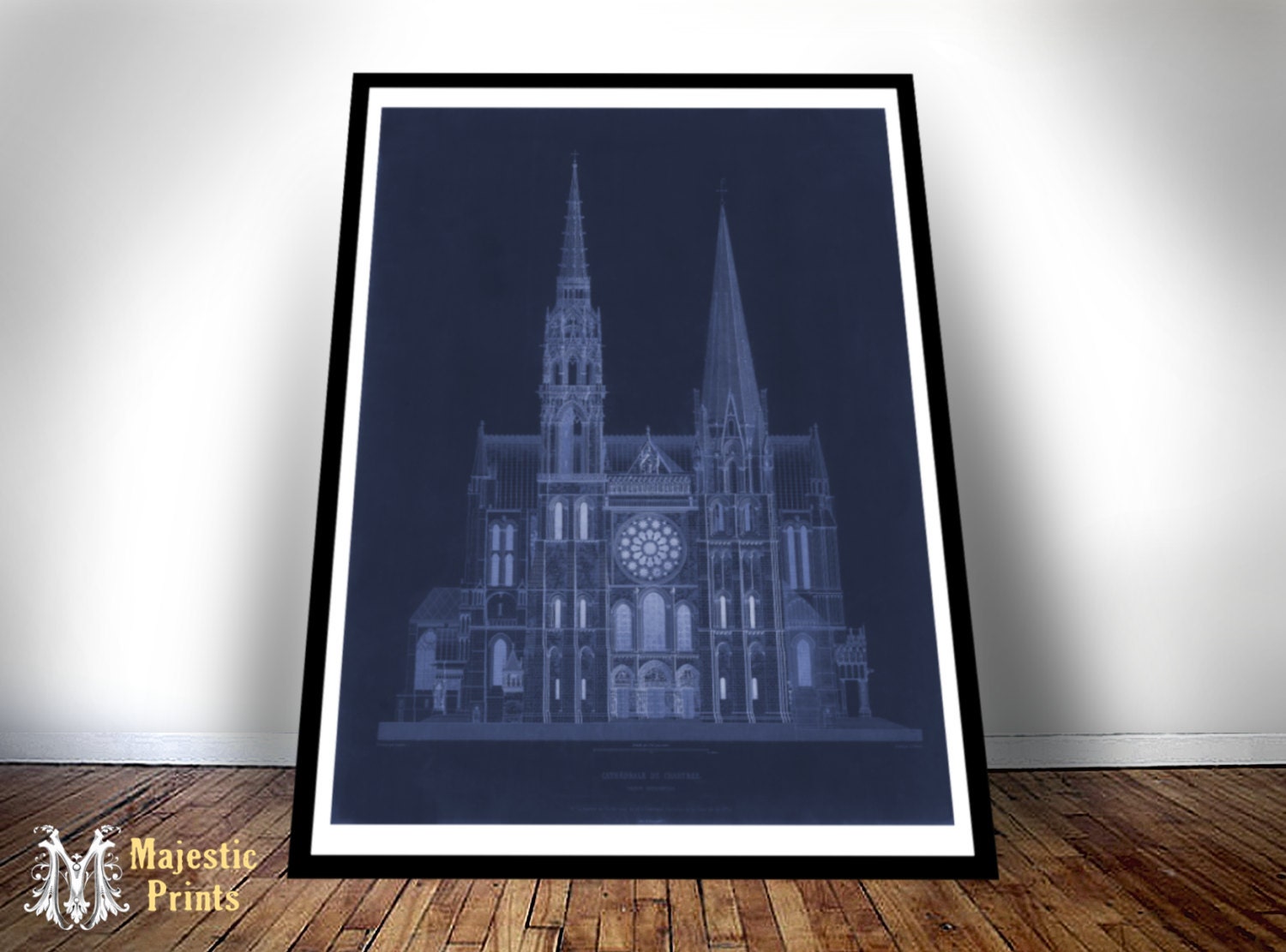 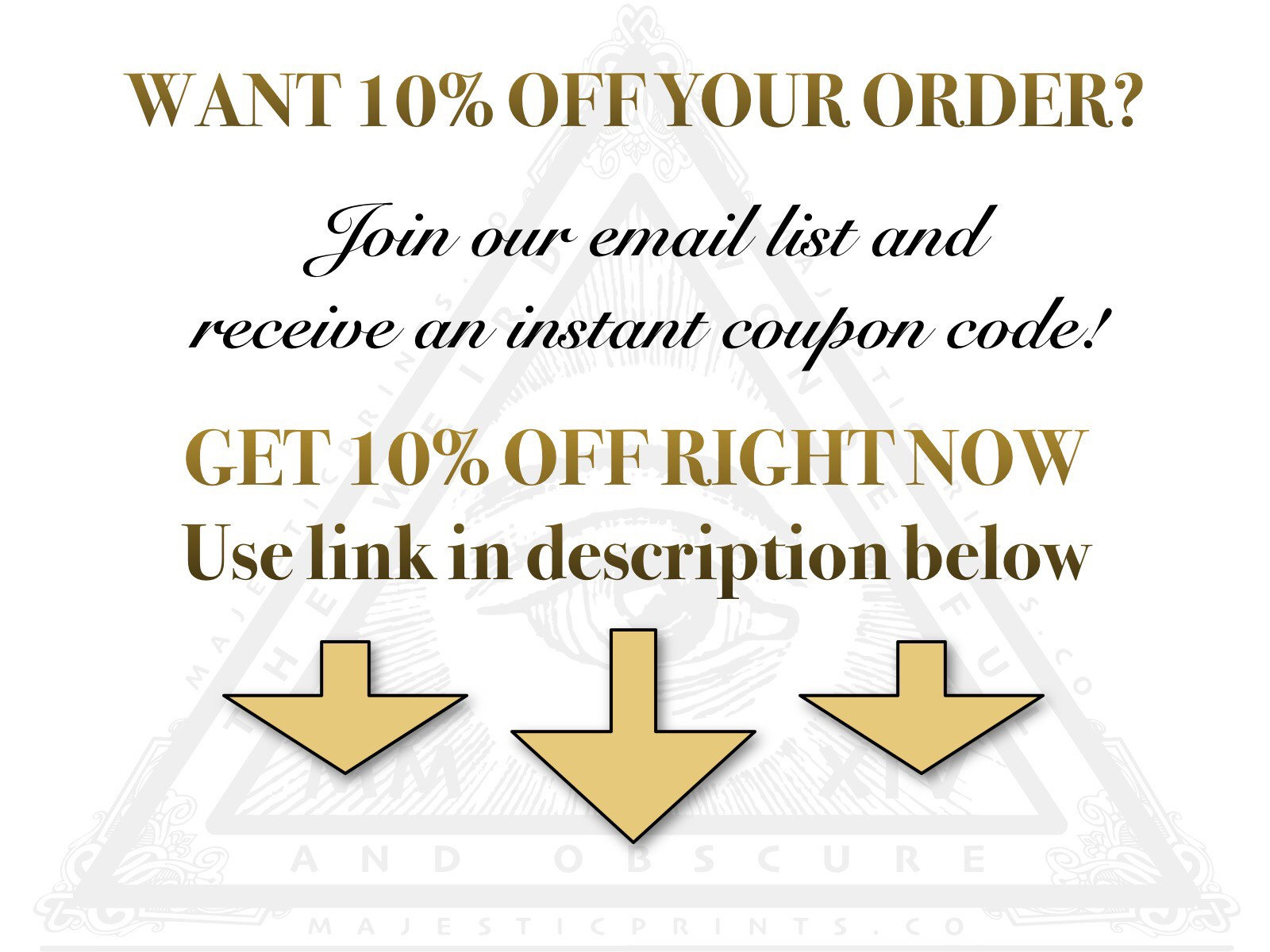 Behold our exclusive blueprint style edition of "Monographie de la Cathédrale de Chartres, Facade Occidentale" by Jean-Baptiste-Antoine Lassus, originally published in 1867, and highlighting the western facade of the building. The Cathedral of Chartres (French: Cathédrale Notre-Dame de Chartres) is widely considered to be the finest Gothic cathedral in France. Its historical and cultural importance is recognized by its inclusion on the UNESCO list of World Heritage Sites.

The current cathedral, constructed mostly between 1194 and 1250, is the last of at least five which have occupied the site since the 4th century, each building replacing a previous one destroyed by either war or fire.

The cathedral has been saved from destruction on several occasions, most notably during the French Revolution and World War II. During the Revolution, a period of heavy anti-religious fervor, the townsfolk of Chartres stepped in to stop a mob from destroying the sculpture on the North porch. At a later point, the Revolutionary Committee decided to destroy the cathedral via explosives, and asked a local architect to organize it. He saved the building by pointing out that the vast amount of rubble from the demolition would so clog the streets it would take years to clear away.

While the city of Chartres suffered heavy damage by bombing in the course of World War II, the cathedral was spared by an American Army officer who challenged the order to destroy it. Colonel Welborn Griffith, Jr. questioned the strategy of destroying the cathedral and volunteered to go behind enemy lines to discover whether the German Army was using the cathedral as an observation post. With a only single enlisted soldier to assist him, Griffith proceeded to the cathedral and confirmed that enemy troops had not occupied it. The order to destroy the cathedral was withdrawn and Allied forces later liberated the area. Unfortunately, Griffith was killed in action in August 1944, in the town of Leves, near Chartres.

For centuries the cathedral has been an important destination for travelers, attracting large numbers of Christian pilgrims who come to venerate its famous relic, the Sancta Camisa, believed to be the tunic worn by the Virgin Mary at the birth of Christ, as well as large numbers of secular tourists who come to admire the cathedral's architecture and historical significance.

This print is a high resolution scan of an original print and is truly an amazing image perfect for framing. It makes an excellent addition to your home or office, and is a perfect gift for the architectural aficionado in your life.


❖ High resolution images printed at optimal size or below to preserve clarity. We won't blow up an image to sell you a more expensive size!

❖ Digitally restored to remove distracting blemishes, stamps, and damage while still preserving the foxing, wear, and creases that lend to the character of these historic images.

❖ Print size includes a 1-2 inch white margin for easy framing, with or without a mat.

☆ ☆ ☆ ☆ ☆
I absolutely love it! The quality is fantastic and the seller is very nice and informative! I'll definitely be buying more from here.

☆ ☆ ☆ ☆ ☆
A beautiful print! Looks stunning framed and hanging on my wall. Quick shipping and great communication by the seller as well. Buy with confidence!

☆ ☆ ☆ ☆ ☆
I was nervous that some details would be lost because of the size, but everything is so crisp and lovely. Shipping was very quick too. Will purchase from again!

Fast service and exactly as described