Beer Street, Gin Lane, and the Road to Temperance
Click here to add a hand-built frame to any print order!

Beer Street, Gin Lane, and the Road to Temperance 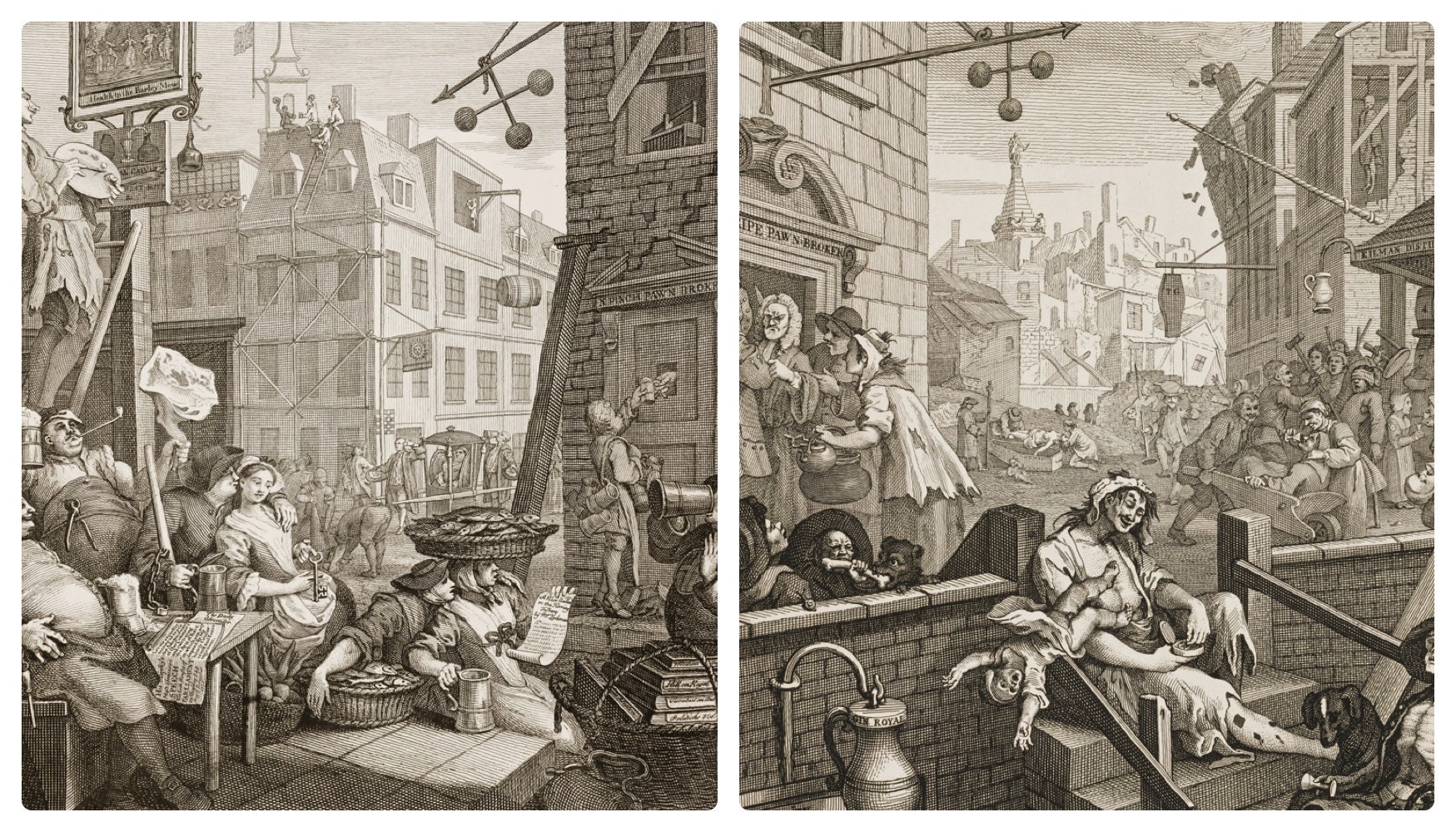 Todays featured artwork are the companion prints of "Beer Street" and "Gin Lane", issued in 1751 by English artist William Hogarth. These impressively detailed works were created in support of what would become the Gin Act, imposing high taxes and government control of the distilling and sales of gin, which had been  popularized as an alternative to French wine and brandy in a time when the two countries were at odds in the late 17th century. Prior to this time alcohol consumption in England was restricted for the most part to ale, beer, and cider. The "Gin Craze", as it came to be known, was a wild departure from these drinking habits, and was an urban phenomenon confined mostly to the working class poor of the capital.

The ready availability and low cost of English gin led to a massive rise in gin consumption, which by the 1730's had risen to the equivalent of 2 pints per week per Londoner, while the consumption of beer remained relatively constant. Officials lamented the pernicious gin as "the principal cause of all the vice & debauchery committed among the inferior sort of people". Daniel Defoe, author of the famed novel Robinson Crusoe, protested that drunken mothers were threatening to produce a "fine spindle-shanked generation" of children.

Though we now tend to regard the spirit as a nuanced herbal concoction, "gin" was really any grain based alcohol, and during this period was a throat searing rotgut known as Mother's Ruin. In the early years it could be produced and sold by literally anyone and everyone -  and it was. The lack of regulations and oversight resulted in poor distilling and bottling practices. The liquor was often adulterated with hideous impurities, and it was not uncommon to cut the sauce with turpentine or sulphuric acid. Tales of gin induced blindness abound. 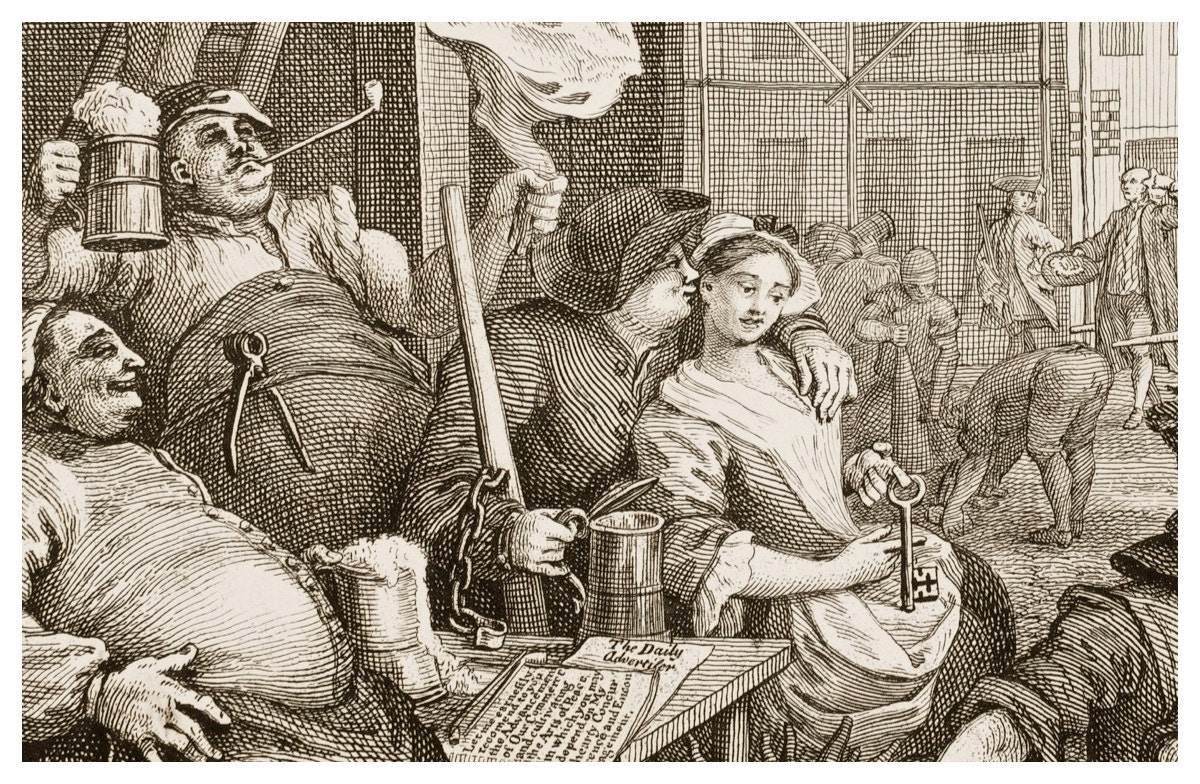 Designed and sold to be viewed alongside each other, Hogarth depicts the evils of the consumption of gin as a contrast to the merits of drinking the nourishing English ale [seen above]. Hogarth portrays the inhabitants of Beer Street as happy and healthy, and those who live in Gin Lane as destroyed by their addiction to vile spirit; but closer inspection reveals other targets of his satire, and implies that the poverty of Gin Lane and the prosperity of Beer Street are more intimately connected than they at first appear. Gin Lane shows shocking scenes of infanticide, starvation, madness, decay and suicide, while Beer Street depicts industry, health, geniality, and thriving commerce. The Gin Lane print bears a verse of warning at the bottom:

it enters by a deadly draught; and steals our life away.

Virtue and truth, driven to despair; its rage compells to fly;

Damn'd cup! That on the vitals preys; that liquid fire contains;

which madness to the heart conveys; and rolls it thro' the veins. 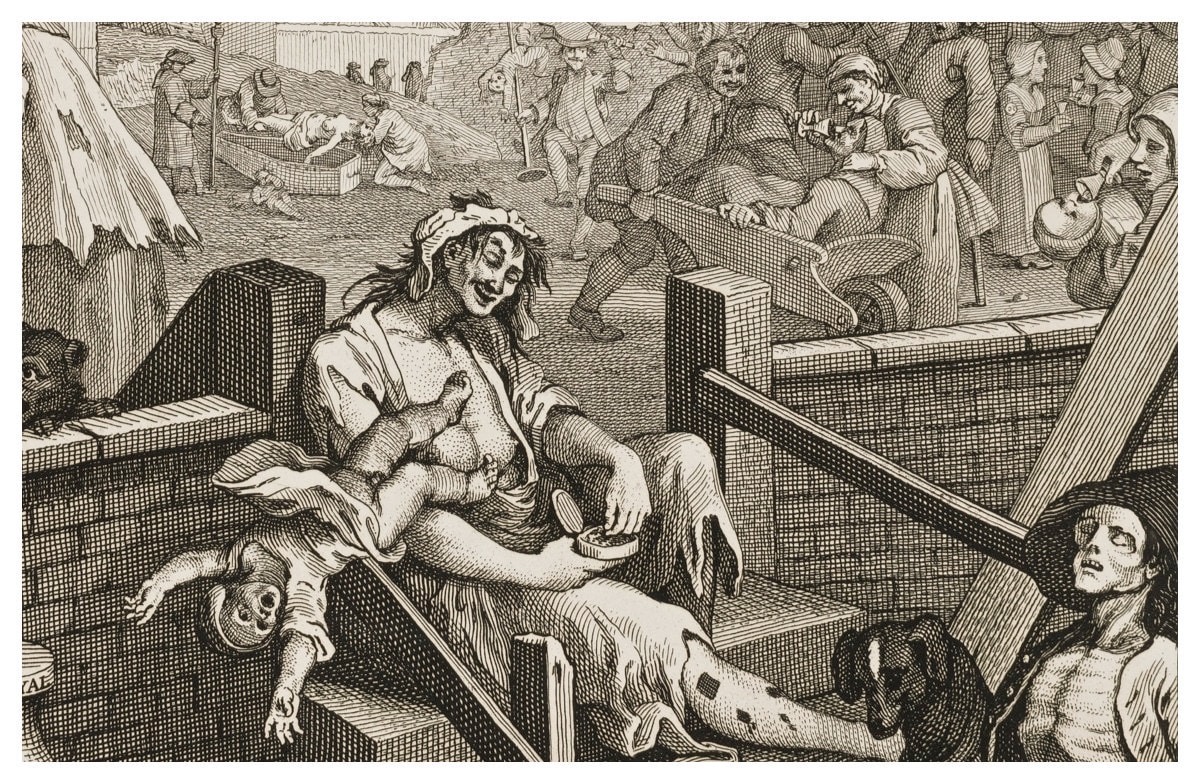 Believing that gin consumption was the major cause of laziness and criminal behavior, Parliament imposed strict controls on the distilling and sale of the spirit, and encouraged less volatile beverages like beer and tea. The prohibition act had little effect beyond increasing smuggling and driving the distilling trade underground. It was eventually abolished, and the "gin craze" soon came to an end as grain prices increased with a series of poor harvests. The ideas stemming from the gin craze would serve to fuel later temperance movements to promote complete abstinence in the nineteenth and twentieth centuries.

You can grab your own copy of this historic set in our shop here.