Love, Arson, and the City of Fire
Click here to add a hand-built frame to any print order!

Love, Arson, and the City of Fire 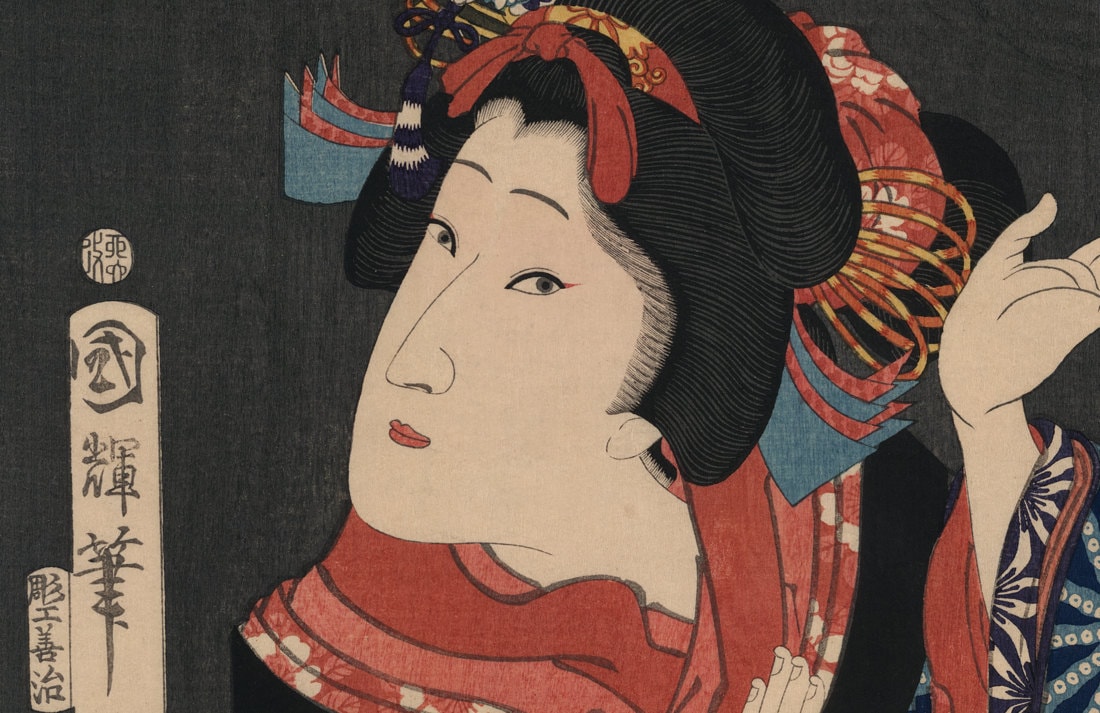 Our featured print today is the 1867 Ukiyo-e woodblock print “The Young Maiden Oshichi”, by Utagawa Kuniteru. The subject is a likeness of the real historical legend Yaoyo Oshichi, a Japanese teenager born in Edo in 1663. Hers is a tragic story of young love gone awry in a sprawling metropolis that had earned the nickname “City of Fire”.

Now, to do her story justice, a quick trip through some medieval Japanese history is in order, but it will bring us back around to our young maiden in full swing…

You see, during this time period fire was both an indispensable element of daily life and a looming threat that could take thousands of lives in a matter of minutes. Edo was a massive city of over one million people and consisted largely of narrow winding streets packed tightly with wooden townhomes where heating and cooking were made possible by charcoal fires.

Accidental fires were common, as were fires after the numerous earthquakes typical to the region, but arson probably equally so for both political and financial reasons. It was no secret that a well timed out of control fire could sway elections and appointments, or provide work for a class of craftsmen, builders and laborers. In response, the shogun tightened the noose on arsonists - pun intended. Anyone convicted of arson or even attempted arson were publicly executed and left on display as a warning. Nevertheless, fires would continue to plague the city.

Throughout the years a comprehensive system of protections were implemented. Laws were passed regarding inflammable building materials, neighborhood fire watches were established, and the city saw the organization of a complex network of samurai and citizen firefighters. With hundreds of fires plaguing the city - some leveling up to 70% of it at one point - reliance on a large, responsive force of firemen was critical. To grasp an idea of their significance, one only need to hear what was often said of the city, “Fires and quarrels are the flowers of Edo, yet the greater essence is the fireman”.

With this historical backdrop in place, we can now pick up the story of our ill fated heroine…

During the great fire of 1682, Oshichi and her family took refuge at the temple Shōsen-in, where she fell in love with Ikuta Shōnosuke, a temple page. Once their house was rebuilt, Oshichi returned returned home with her father, but in a desperate effort to return to her love at the temple, Oshichi intentionally set fire to the her rebuilt neighborhood. She was quickly caught by the police.

The magistrate at her trial, knowing she was sixteen years old, asked her, ”You must be fifteen years old, aren't you?”. At the time, boys and girls under the age of sixteen were not subject to the death penalty, and since strict family registration systems were not yet widely implemented, confirmation of age by a bureaucrat was deemed sufficient. Misunderstanding the magistrate's intentions to try her as a minor, she replied that she was indeed sixteen. At a loss, the magistrate asked her firmly again, ”You must be fifteen years old, are you not?” Not taking the hint again, she honestly stated her age as sixteen, leaving the magistrate no alternative but to sentence her to death. She was publicly burnt at the stake at Suzugamori for her crimes in 1683, at the tender age of 17.

The theme of someone dying for love was popular amongst Edo audiences and there were novels, plays and dances based on her tragic and youthful folly. Yaoya Oshichi’s story is recounted in various ways in Kabuki and puppet theater dramas, where her character is portrayed in a kimono bearing the distinctive starburst-like design still associated with her.

In one version of her story, Oshichi does not commit arson, but instead climbs a fire tower on a snowy night to ring the alarm bell to open the city gates in order to save the life of her lover, whom she cannot otherwise reach because of the nightly curfew. The penalty, however, for sounding a false fire alarm is death, a fate Oshichi heroically chooses to face as a noble figure whose selfless devotion saves the man she loves.

A memorial site in Tokyo displays a “Jizo” diety known to protect travelers and children, with a hotpot on his head to symbolically draw the heat from the fires that burned Oshichi. Her gravesite still remains at the Enjo-ji Temple and people bring gifts of fruit, hotpots, and origami cranes to this day.