Oedipus on Murder, Incest, Fate, and the Riddle of the Sphinx
Click here to add a hand-built frame to any print order!

Oedipus on Murder, Incest, Fate, and the Riddle of the Sphinx 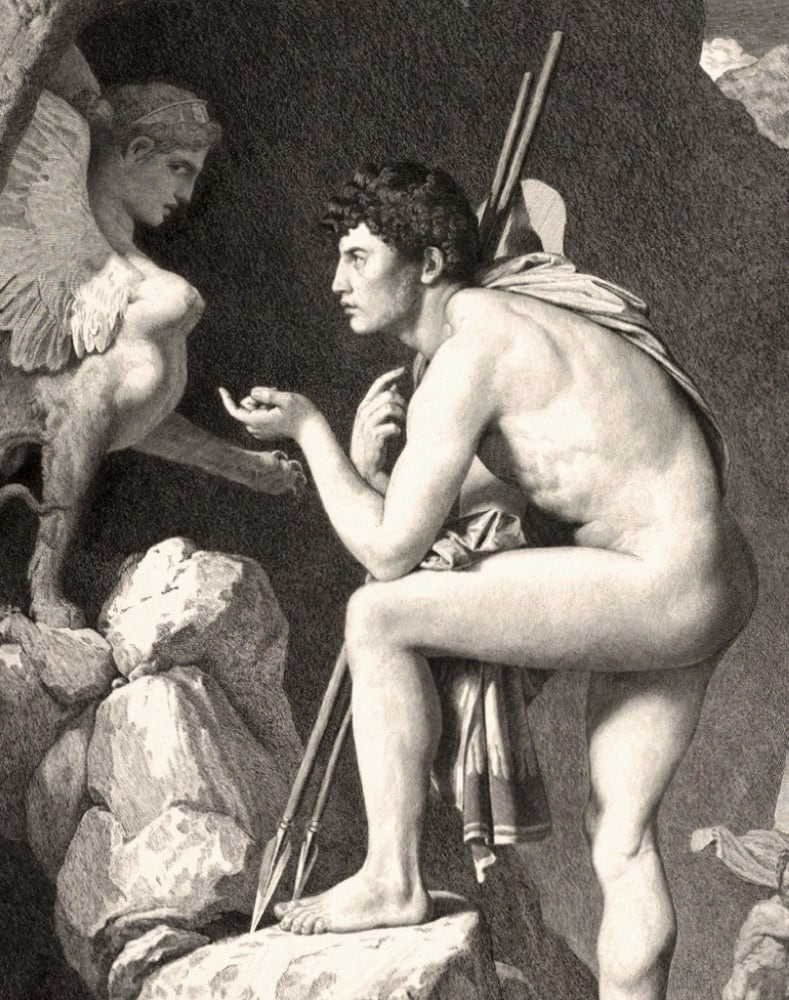 Today we bring to light a scene from Sophocles' infamous Greek tragedy "Oedipus Rex", rife with all those things that make for intriguing television: Murder, incest, fantasy creatures, enigma, prophecy, and fate!

Early in the play it is foreseen by the Oracle at Delphi that Oedipus would would kill his father and marry his mother. He flees to the city of Thebes in an attempt to escape his fate. On the way, his chariot is nearly run off the road by another traveler who fails to yield, and in a display of what we can only term "road rage", ends up killing the man.

In our exclusive edition of Jean Auguste Ingres's detailed drawing, we meet the traveling Oedipus in conversation with the Sphinx, a creature with the head of a woman, body of a lion, and wings of an eagle, who guards the road into the city of Thebes.

The Sphinx would pose a riddle to passing travelers; one had only to answer correctly to pass into the city, yet none had ever solved it and were promptly devoured. The area below the Sphinx's perch is littered with the remains of those who passed before.

The Sphinx's riddle went as such:

"A thing there is whose voice is one; Whose feet are four and two and three. So mutable a thing is none That moves in earth or sky or sea. When on most feet this thing doth go, Its strength is weakest and its pace most slow."

Oedipus answered that the thing in question must be Man, who goes on all fours as a baby, walks on two as an adult, yet in old age relies on three with the addition of a walking stick. Oedipus was the first to ever solve the riddle, and being so shamed and enraged the Sphinx killed herself.

Oedipus went on into the city of Thebes, where he was promptly made king, since their previous king had been killed by a "bandit" on the road. As king, he marries the queen, wife of the aforementioned victim. Then, through the eyes of the Oracle and a blind seer, Oedipus learns only too late that ones fate can not be escaped, and has fulfilled the prophecy in grand fashion.

On an intersting side note, Oedipus Rex is the basis for what the famed psychoanalyst Sigmund Freud would term the "Oedipus Complex", wherein a male child, sometime around the age of four, has positive libidinal feelings toward the parent of the opposite sex and hostile or jealous feelings toward the parent of the same sex. Freud theorized that if this issue went unresolved, it may later become a source of adult personality disorder. The same theory applies to girls in the "Electra Complex".

I hope you find this bit of backstory enjoyable, and that it adds to your appreciation of these vintage works. They make great conversation peices, and now you have the story to go with it! You can buy this amazing print for yourself here: Oedipus and the Sphinx